Haven’t felt too well the last couple of days. I’ve had a lot of muscle pain in my shoulder and I’ve got a lot of cold-like symptoms. Well, everything but the cold. Weird. Kera had very similar symptoms last week. She’s feeling much better now, hopefully, I will as quickly as well.

I’ve been running a lot lately, in part because I often have only so much time in between classes and it’s dark until almost 8:00 a.m. and is dark again by slightly after 4:00 p.m./16:00. Therefore, I can at least get a run in while it’s daylight. Anyway, I’ve attempted a couple of times lately to go for a ride. The first time I had a flat within five minutes of leaving the apartment. That one was due to failed “Ghetto” tubeless that I’ve been attempting on my Black Sheep. The next ride attempt ended up with me walking over 1.5 hours back home in the dark when I had a front flat on the “Bastard Cross” and didn’t have the necessary equipment to repair it. Trust me….that SUCKED!

On Saturday, I managed to get out late in the afternoon for the first successful ride in almost two months. It felt really good to be out of the singlespeed. However, I realized just how pitiful of shape that I’m currently in when it comes to cycling. My running fitness is pretty o.k. outside of some shin-splints but my cycling fitness is beyond piss-poor. Hopefully, now that the days will start to get longer I can get out more often, even at night. We’re also going to attempt to get out this weekend and look at potential new gyms in the area. We’re thinking that regular workouts will help both of our moods.

On the same ride, I managed to lose a part of one of my winter shoes. It sucks as it’s often very difficult to get parts here. That thin there in the photo is supposed to have a top on it and a screw in the middle. It tightens up the whole shoe evenly. Well, it did, till I lost the part. In theory, I have replacement parts coming from Switzerland though. Hopefully, it won’t take too long before they arrive. 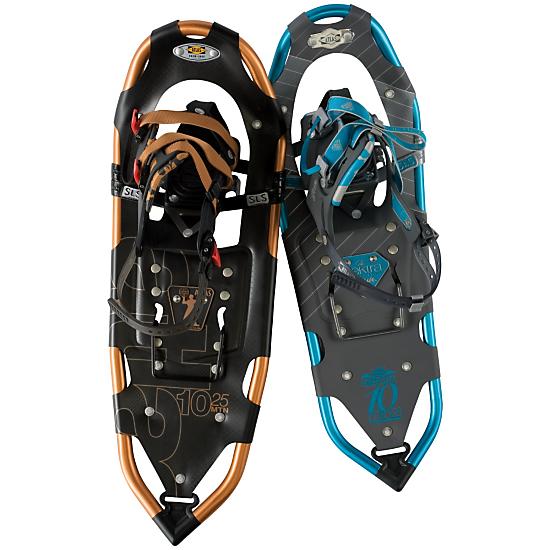 We did get some new toys though….. My new snowshoes arrived today. Baby-cat seems to think that she’d like to go out in the snow with us as well. These are the Atlas 1030’s for me and the Women’s Electra 10 Series for Kera as well. Nice stuff. Hers is the White pair and mine is the one absconded by the cat. We’ve already got a good snowshoe tour book and most of the resources for going out and having a great day in the snow. Hopefully, Kera’s will arrive in the next day or so and we’ll manage to get out to the mountains this weekend for our first test-run. If we don’t manage to get out on Saturday, which might be the case if we get caught up in looking at gyms. In that case we’ll go out on Sunday. Either way…. I’m really looking forward to it.

Kera’s been knitting up a storm (can’t show you pics for a few reasons) and the creativity bug has now infected me. I made the above belt from one of Kera’s old mountain bike tires. I’ve got a few ideas to make some other interesting things (if you’re a cyclist) but I’ve yet to create them.

Lastly, I’ve added another page to the blog with probable/possible events for ’09.

13 thoughts on “Not feeling too well….but Christmas and ’09 are closing in”

Subscribe to What the hell are they doing now? by Email

What the hell are they doing now?

At your own risk!